You are here: Home / Oncology / Metastasis or Metastatic Disease
toc

Metastasis or metastatic disease occurs when the cancer cells spread from the site of their origin to the other distant parts of the body. The most common organs involved by metastases are the lungs, liver, bone, and brain.

In metastasis, cancer cells break away from the original or primary tumor. After traveling through the bloodstream or lymphatic channels, these cells form a new tumor in other parts of the body. The new metastatic tumor that is formed has the same characteristics as the original tumor.

It must be emphasized that local invasive growth (spread of the primary tumor to adjacent organs) is not considered metastases.

Metastasis is an important element in cancer staging systems such as the TNM staging system, where M stands for metastasis. The presence of metastasis places a cancer in Stage 4. The possibility of a definite cure is greatly or completely reduced when cancer has metastasized.

It is also called Metastatic cancer, Stage 4 cancer or Advanced cancer. ( However, all advanced cancers may not be metastatic. Cancer can be locally advanced with spread to nearby tissues or lymph nodes without having spread to distant organs).

Metastatic cancer is described along with its primary tumor. For example, metastasis in the bone may be from a primary tumor in the breast. The cells of the new secondary tumor formed have features similar to the primary tumor.

Sometimes the original or primary tumor remains unidentifiable and the patient presents with metastatic tumor. In such cases, the metastasis is called metastatic cancer with unknown primary.

How Does Metastasis Occur?

Metastasis is the process by which cancer cells migrate throughout the body.

Cells have to break away from the primary tumor to form secondary tumors at some other place in the body.

Cancer cells spread to various parts of the body through the following steps:

Primary tumors consist of heterogeneous populations of cells. The cells with genetic alterations are able to surmount physical boundaries, spread, and colonize a distant organ.

Each tissue has a specific milieu where the cancer cells can grow. However, to break and grow at some other place, the cells need to become exposed to environmental stresses, including a lack of oxygen or nutrients, a low pH,  and mediators of the inflammatory response. These pressures can select tumor cells with the capability of growth despite these conditions.

A malignant cell that has broken away from the primary tumor and gained access to blood or lymphatic vessels is not always successful in forming a secondary tumor. It could be killed by the immune system or get damaged or stuck in vessel walls. Moreover, the cell may not be able to survive once it leaves its colony or primary tumor.

There are three primary paths of tumor spread:

The hematogenous system is the primary route of spread.

The lymphatic vessels are mainly involved in the spread of cancer to the local lymph nodes. From here, cancer spreads further via the hematogenous route. 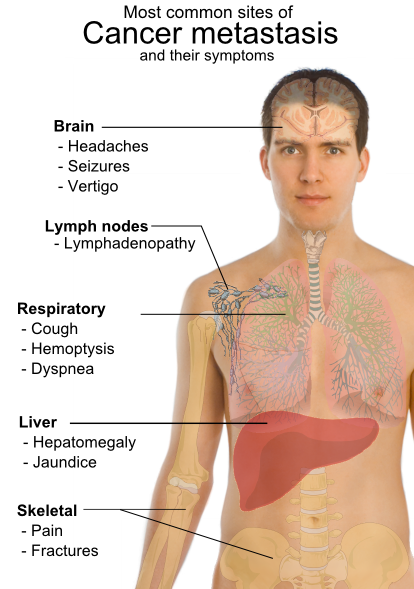 Symptoms depend on the location of the metastatic tumor.

Although metastatic cancer may cause pain, it is often not the first symptom.

Once cancer shows metastasis, it becomes difficult to treat. Although some types of metastatic cancer can be treated with current regimens, most have no definite treatment.

Still, there are treatments for all patients with metastatic cancer which includes more aggressive protocols than the treatment of the localized tumor.

The main aim of the treatment is to stop or slow the growth of cancer or to relieve symptoms caused by it.

Pain relief forms an important component of the treatment of metastasis. Palliative care which helps to improve the quality of life of people suffering from advanced cancer should be part of treatment.

The choice of treatment would depend on the following factors:

There are three approaches to metastases and the role of each would depend on the type of metastatic tumor, location, and extent of metastases.

Radiotherapy is done to suppress the growth of the tumor and provide pain relief.

Surgery is done either for removal of tumor or fixation of pathological fractures (in case of bone metastasis).

Research is being carried out to find new ways and treatments which can kill or stop the growth of primary and metastatic cancer cells. This includes boosting the immune system to fight cancer. Treatment options that can prevent or disrupt the cancer cells from migrating to distant organs, thus preventing metastasis are also being researched.

Nonalcoholic steatohepatitis (NASH) is inflammation and damage of the … END_OF_DOCUMENT_TOKEN_TO_BE_REPLACED