Pure Red Cell Aplasia (PRCA) is a rare disorder in which there is a failure of the bone marrow to produce precursors of red blood cells (RBCs or erythrocytes) resulting in anemia. 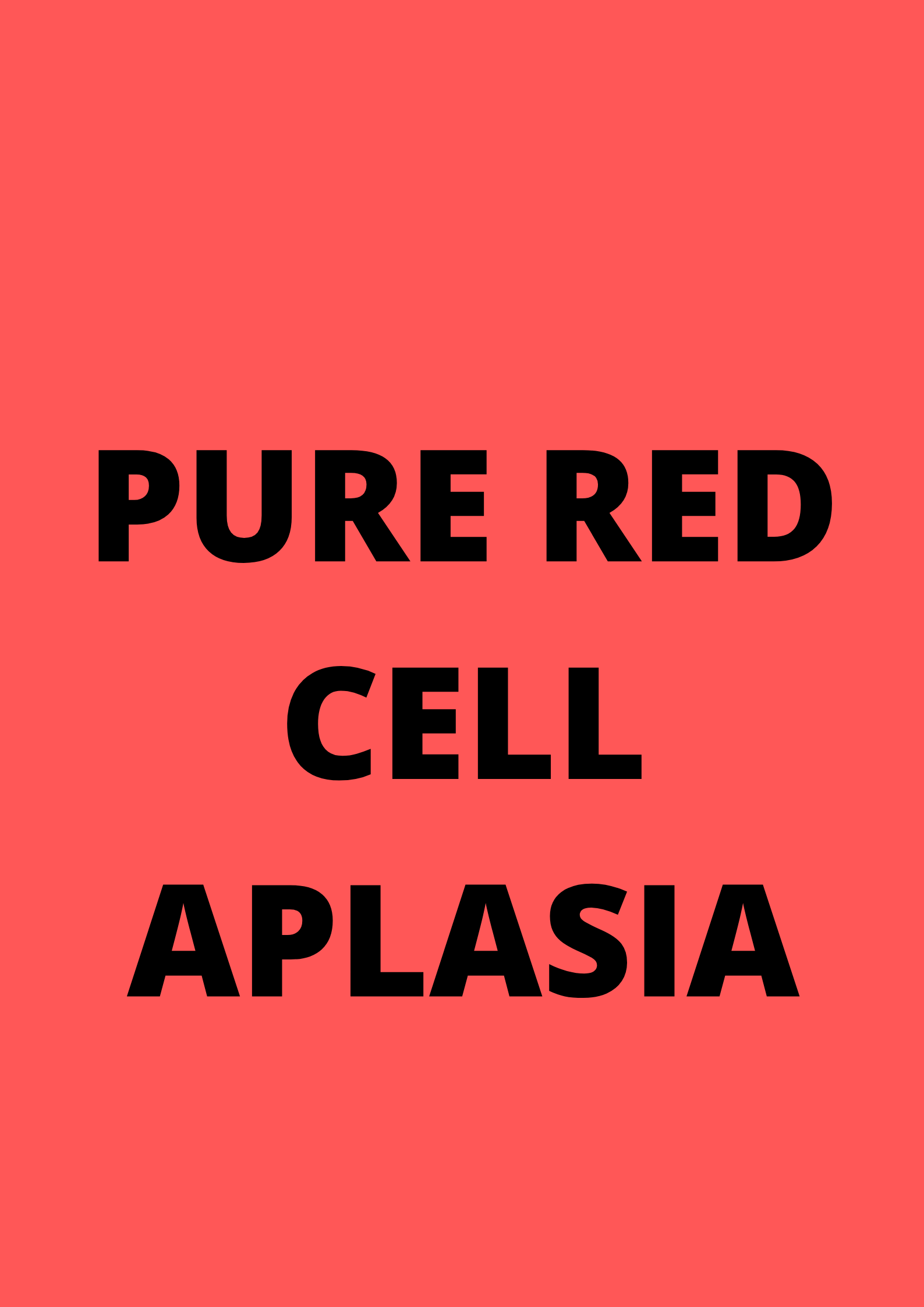 The disorder may be acquired or congenital.

Acquired PRCA can occur due to unknown reasons (idiopathic)  or be secondary to some other underlying disorder. The most common underlying disorders include autoimmune diseases, tumor of the thymus gland (thymoma), viral infections, or certain drugs. Congenital PRCA (Diamond Blackfan syndrome) is a rare disorder affecting children.

In PRCA, the bone marrow stops producing RBCs. However, the production of WBCs and platelets remains unaffected.

Pure red cell aplasia is an uncommon disorder. The idiopathic form is the most common type of PRCA. PRCA occurring secondarily to medications and infections is underestimated because it is self-limiting.  Diamond-Blackfan syndrome is rare.

There is no racial, age, or sex predilection for the disorder. However, females are more likely to have autoimmune disorders.

What are RBCs and Erythropoiesis?

RBCs give the blood its characteristic color. They contain hemoglobin—a red, iron-rich protein that binds oxygen. Their main function is to carry oxygen throughout the body.

Production of new red blood cells within the bone marrow is called erythropoiesis which is carried through the following stages.

The life span of an RBC is about 120 days in the circulation.

Erythropoietin stimulates the red marrow of the bones to form increased numbers of proerythroblasts and hasten the maturation of red blood cells.

PRCA does not have any specific clinical features. The patients present with general symptoms of anemia. These include weakness, fatigue, general malaise, poor concentration and shortness of breath.

Chronic anemia may result in behavioral disturbances in children and reduced scholastic performance in school-going children.

In very severe anemia, the body may compensate for the lack of oxygen-carrying capability of the blood by increasing cardiac output. The patient may then have symptoms such as palpitations, angina, and heart failure.

On examination, the signs include pallor of skin, conjunctiva and nail beds.

Causes and Types of PRCA

Pure red cell aplasia is characterized by maturation arrest in the formation of erythrocytes.  Erythroblasts which give rise to RBCs are almost totally absent in bone marrow.

There are two types of PRCA:

It is the most common type of PRCA and usually affects adults.

It is further of two types:

It can be transient and reversible. PRCA which is secondary to infections or drugs is often reversible once the infection goes away or the drug is stopped. Transient erythroblastopenia of childhood (TEC) which occurs after viral infections is usually transient and self-limited.

Diamond-Blackfan anemia is a rare congenital form of PRCA which is detected at birth or during the first two years of life. It is a life-long condition. Besides features of anemia, the patients may also have physical abnormalities or mental retardation.

The reticulocyte count is a measure of bone marrow activity. Low count indicates that the bone marrow is not producing enough RBCs.

It is usually elevated, sometimes to high values.

A small sample of blood is checked under a microscope to look for abnormalities in blood cells. Anemia is usually of normocytic type although it may be macrocytic. WBC and platelet series are usually normal.

Erythropoiesis is affected. The number of erythroid precursors is markedly reduced. WBCs and platelet series are unaffected unless there is an associated secondary hematological disorder like leukemia.

A bone marrow biopsy can also be used to detect iron overload, which occurs as a complication in patients who are given multiple blood transfusions for treatment.

It can help to diagnose bacterial including mycobacterial infections.

To diagnose iron overload in patients who have received multiple blood transfusions.

Serum vitamin B-12 and folate levels

To rule out megaloblastic anemia in those presenting with macrocytosis.

This is required if the following disorders are suspected

The characteristic features of PRCA include the following:

The treatment goal is to restore red blood cell production and to treat any underlying disorder. The most common treatments are:

Treat the underlying cause

The main treatment of secondary PRCA is treating the underlying cause.

Drugs causing PRCA should be discontinued.

Parvovirus B19 infections may require treatment with high-dose intravenous immunoglobins. PRCA due to drugs or infections is usually reversible within a few months.

Hematological malignancies or solid tumors should be treated appropriately with surgery, chemotherapy or radiation.

Thymoma-associated PCRA should be treated with surgical removal of the thymoma.

It is indicated in cases of severe anemia or those having cardio-respiratory symptoms. Patients who don’t respond to other treatments may require blood transfusions on a regular basis.

It is considered in patients who have had multiple blood transfusions and have evidence of iron overload.

It can be used to remove autoantibodies in case of autoimmune associated PRCA.

They are indicated in idiopathic PRCA as well as in secondary PRCA due to autoimmune disorders. Prednisone is the most commonly used steroid. About half of the patients show a positive response within 4-6 weeks.  Corticosteroids, however, can have severe side effects when given in high doses (as required for the treatment of PRCA). Also, they have to be used judiciously in children as they can cause growth retardation.

Read more about Side Effects of Corticosteroid Therapy

They also have a role in idiopathic and autoimmune PRCA if the patient is not responding to corticosteroids. Drugs used are cyclophosphamide, cyclosporine, azathioprine with or without corticosteroids. Other medicines used are anti-thymocyte globulin or rituximab.

Autologous and nonmyeloablative allogeneic peripheral stem cell transplantation can be carried out in patients who are not responding to other treatments.

The prognosis of patients with idiopathic PRCA is poor with patients surviving for about 1-2 decades.

The prognosis of secondary PRCA depends on the underlying cause. Most of these conditions result in transient pure red cell aplasia which gets reversed once the causative factor is removed or treated.

Diamond blackfan anemia is a life long condition. With treatment, many children survive into adulthood.

Nonalcoholic steatohepatitis (NASH) is inflammation and damage of the … END_OF_DOCUMENT_TOKEN_TO_BE_REPLACED