You are here: Home / Basics / Arterial Supply of Body – An Overview
toc

Arteries are the large vessels that carry blood away from the heart. Arterial supply of the body is formed by a network of arteries that carry the blood to

Arterial supply of the pulmonary system carry deoxygenated from the right ventricle to the lungs to get it oxygenated by lungs. This blood is then returned to the left atrium of the heart by pulmonary vein and then passed to the left ventricle and from thereon to the systemic circulation.

Systemic arteries have a common trunk – the aorta which receives blood from the left ventricle.

Aorta is a large trunk that commences at the left ventricle and goes all the way to the abdomen. Throughout main arteries emerge from the aorta to supply different regions of the body and further branch for a wider reach.

In their distributions, the arteries may communicate by forming the anastomosis, often to reinforce or enrich the circulation of a particular region.

The arteries further give off branches which further divide into smaller branches called arterioles which in their turn open into a close-meshed network of microscopic vessels, termed capillaries. The capillaries are the places where tissue oxygen and nutrition is exchanged. , the true deliverers of oxygen and nutrients to the cells.

The capillary vessels further form venules which then gradually drain to larger veins and finally the large venous trunk – vena cava and return the deoxygenated blood to the right atrium of the heart.

Arteries are found in all parts of the body, except in the hairs, nails, epidermis, cartilages, and cornea.

The article is an overview of the arterial system and specific arteries are discussed separately in detail.

The pulmonary trunk is a vessel that arises from the right ventricle of the heart, extends upward, and divides into the right and left pulmonary arteries that carry deoxygenated blood to the lungs.

It arises from the conus arteriosus of the right ventricle and is wholly contained within the pericardium along with aorta.

The right pulmonary artery is longer and larger than the left.

The aorta begins at the upper part of the left ventricle, ascends for a  short distance and arches backward and to the left side. From thereon, it descends thorax and passes into the abdominal cavity through the aortic hiatus in the diaphragm.

Opposite the lower border of L4 [fourth lumbar vertebra], it divides into dividing into the right and left common iliac arteries.

It begins at the upper part of the base of the left ventricle. At the origin, it has three small dilatations called the aortic sinuses lying opposite to segments of the valve.

Th aorta ascends to join the aortic arch where the caliber of the aorta increases. This dilatation is called the bulb of the aorta.

It runs backward and its left side is in contact with the left lung and pleura.

It is the part of the aorta till aortic hiatus [roughly lower border of T12] and is contained in the posterior mediastinum.

In the beginning, it is on the left of the vertebral column but goes to midline gradually with the descent.

It begins at the aortic hiatus of the diaphragm [lower border of T12 vertebra],

It descends in front of the vertebral column and ends on the body L4 vertebra, slightly left to the midline.

It ends by dividing into two common iliac arteries.

Arteries of Head and Neck

Two common carotid arteries are main suppliers to head and neck. Right common carotid is branch of  brachiocephalic trunk behind the sternoclavicular joint whereas the left is from the highest part of the arch of the aorta.

Each artery passes obliquely upward, from behind the sternoclavicular articulation. At the level of the upper border of the thyroid cartilage, where it divides into the external and internal carotid arteries.

It begins at the level of the upper border of the thyroid cartilage, curve slightly to pass upward and forward and then back to space behind the neck of the mandible.

It supplies the anterior part of the brain, the eye and its appendages, and few branches to forehead and nose.

The vessels is divided into four parts- cervical, petrous [within petrous part of the temporal bone], cavernous [within cavernous sinus], and cerebral.

Some authors divide this artery into seven parts. 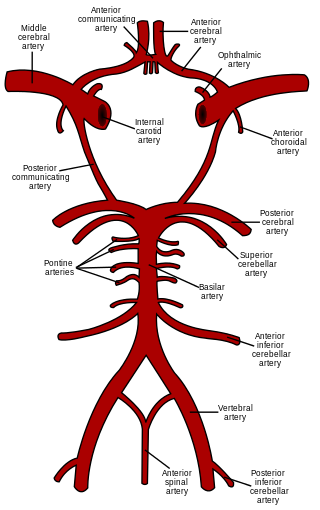 An extensive anastomosis is present in the base of the brain and is called cerebral arterial circle (of Willis). It is formed by

The anterior cerebral artery arises from the internal carotid at the medial extreme of the lateral sulcus of the brain.

It goes forward and medially above the optic nerve, across the anterior perforated substance, to the start of the longitudinal fissure.

Here, it connects to connected opposite counterpart the anterior communicating artery and participates in the formation of the circle of Willis.

Thereon, both the vessels run side by side in the longitudinal fissure, curve around the genu of the corpus callosum to turn back and continue to end by anastomosing with the posterior cerebral arteries.

The middle cerebral artery is the largest branch of the internal carotid artery that first runs on lateral sulcus and then backward and upward on the surface of the insula.

It divides into a number of branches for the lateral surface of the cerebral hemisphere.

Posterior cerebral is a branch of the basilar artery [which is formed by joining vertebral arteries].

A small but constant branch that arises from the internal carotid, near the posterior communicating artery. It is distributed to the hippocampus, fimbria, tela choroidea of the third ventricle, and choroid plexus.

Its extent is to the outer border of the first rib. After this it continues as axillary artery till lower border of axilla and then termed the brachial artery which finally divides into the radial and ulnar arteries.

The branches of the subclavian artery are

It is the continuation of the subclavian artery in the axilla. It starts at the outer border of the first rib and continues as brachial artery after the lateral axillary fold.

From the second part,

It commences at the lower margin of the tendon of the teres major. It travels downward, initially medial and then gets in front of the bone. Its bifurcation lies midway the arm to end about 1 cm below the elbow.

Here it branches into the radial and ulnar arteries. At first, the brachial artery lies medial to the humerus, but as it runs down the arm, it gradually gets in front of the bone

The radial artery is a terminal branch of the brachial artery that starts below the flexion crease of the elbow and passes along the radial side of the forearm to the wrist.

It is the larger of the terminal branches of the brachial artery and begins a little below the bend of the elbow.

It is a short thick trunk that arises from the front of the aorta, just below the aortic hiatus of the diaphragm.

These arise immediately below the superior mesenteric artery.

The right is longer and left is higher.

small inferior suprarenal branches to the suprarenal gland, the ureter, and the surrounding cellular tissue and muscles.

Common iliac arteries are terminal branches of the abdominal aorta at L4 level.

They diverge from the termination of the aorta, pass downward and laterally, and divide into 2 branches, the external iliac and internal iliac arteries.

Internal iliac supplies the viscera and muscles of the pelvis, buttock, the external genitalia, and the medial side of the thigh. It is also called hypogastric artery.

From the posterior trunk – iliolumbar, lateral sacral, and superior gluteal

It is the direct continuation of the external iliac that runs as a single trunk from the inguinal ligament to the lower border of the popliteal fossa starting its course anterior to the femur and then going medialward and finally posterior to lower end of femur.

The femoral artery begins immediately behind the inguinal ligament and ends at the junction of the middle and lower thirds of the thigh, where it passes through an opening in the adductor magnus to become the popliteal artery.

It is the continuation of the femoral and extends from the opening in the adductor magnus and vertically downward to the lower border of the popliteus, where it divides into the anterior and posterior tibial arteries.

It typically passes anterior to the popliteus muscle and then through an oval opening at the superior aspect of the interosseus membrane. The artery then descends between the tibialis anterior and extensor digitorum longus muscles.

It continues as the dorsalis pedis artery at the level of the anterior aspect of the ankle.

The dorsalis pedis is the continuation of the anterior tibial. It passes forward from the ankle joint along the tibial side of the dorsum of the foot to the proximal part of the first intermetatarsal space

Divides into the first dorsal metatarsal and the deep plantar branches.

it is the other terminal branch of the popliteal artery and travels in the posterior compartment of the leg.

Arteries are composed of three coats from inside out

The 2 inner coats can be very easily separated from the external coat.

Arterial sheaths are formed by fibroareolar investments, which form their sheaths. The vessel is loosely connected with its sheath by delicate areolar tissue, and the sheath usually encloses the accompanying veins, and sometimes a nerve.

Blood supply of arteries is by nutrient vessels called the vasa vasorum. these arise from a branch or neighboring vessels and are distributed to the external coat. Nerve fibers from the sympathetic nervous system supply the arteries.

On larger vessels, these form plexus and the branches are distributed principally to the muscular tissue of the middle coat.

These fibers cause the contraction and relaxation of this tissue,  to regulate the amount of blood sent to any part.

Nonalcoholic steatohepatitis (NASH) is inflammation and damage of the … END_OF_DOCUMENT_TOKEN_TO_BE_REPLACED